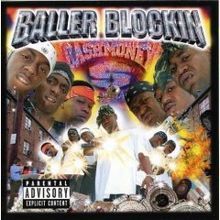 Baller Blockin is the soundtrack for the film Baller Blockin' by the Cash Money Millionaires, released September 12, 2000 on Cash Money, Vivendi, and Universal. The soundtrack features most of the then-roster of Cash Money, including Baby, Big Tymers, Juvenile, BG, Lil Wayne, and Hot Boys. Other artists include E-40, UGK, 8Ball & MJG, Nas and Mack 10. Music videos were done for “Baller Blockin'” (featuring E-40) and “Project Bitch”. The album debuted & peaked at #13 on The Billboard 200 chart with 1st-week sales of over 80,000 copies in the US and was certified Gold on December 19, 2000, by the Recording Industry Association of America (RIAA) for selling over 500,000 copies in the United States Of America
Distribution of songs on Baller Blockin' soundtrack by producer
Songs